Trying to call us? We are currently updating our system. Contact us using the Live Chat feature or email us at info@qreport.com.au and we'll call you back.

When you first start shopping for an engagement ring, you might feel that you’ve gone back to school...

END_OF_DOCUMENT_TOKEN_TO_BE_REPLACED

How to Insure an Engagement Ring Without Home & Contents Insurance

Is it possible to insure an engagement ring without home and contents insur...

What Kind of Documents Do I Need to Get My Ring Insured?

You’ve found the ring of her dreams, and now you need to protect it. Specia...

Athletes have always been trendsetters. Back in the 90s, Michael Jordan’s worldwide popularity sent the demand for his Air Jordans skyrocketing. But athletes’ influence can stretch far beyond athletic shoes and sports equipment.

Many professional athletes today have bridged partnerships with luxury watchmakers. Whether they simply love collecting watches or they sign official endorsement contracts, athletes drive trends and demand in the luxury watch world.

Before the 2014 World Cup, Neymar walked into a GaGá Milano boutique in Tokyo and spent ¥20 million (267,000 AUD) on 16 watches and accessories. Today, Neymar is GaGá Milano’s brand ambassador, and he has his own line of GaGá watches.

On many of the Neymar GaGá watches, the numbers 10 or 11 have stylised features (Neymar wore #11 when he played for Barcelona, and he wears #10 for the Brasilian national team). All the luxury watches in GaGá’s Neymar collection run in limited editions, so you best snatch one up before they’re gone. 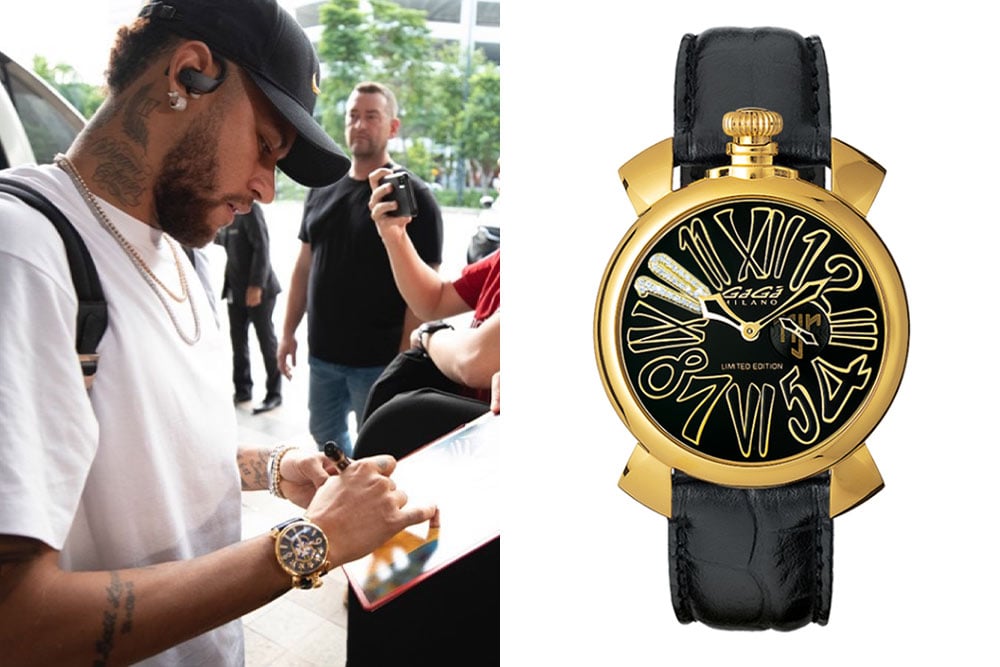 Now retired from football, David Beckham is a legend. Known for his tireless work on the field, Beckham now spends his time on philanthropic work, especially for charities that focus on children and education.

As a brand ambassador for Tudor luxury watches, Beckham is often spotted with a Black Bay Bronze divers watch or a Black Bay Chrono on his wrist. Tudor co-created watches with Rolex for many years, and now the brand is owned by Rolex. It launched its first watch in Australia back in 1932.

American football legend Tom Brady helped design the TAG Heuer Carrera Chronograph 01 after his fifth Super Bowl victory. Based on the Heuer 01 Chronograph in 43mm, the Brady Special Edition features a blue dial with the date, constant seconds and a prominent number 12 to represent his jersey number.

The symbolism doesn’t end there, however. The watch consists of 466 pieces in honour of Brady’s total passing yards during the game in which the New England Patriots defeated the Atlanta Falcons in Super Bowl LI.

Woods has been a Rolex sponsor since 2011, but his career waned for several years. During that time, some of his sponsors (Gatorade, AT&T, and Accenture) dropped him.

After Tiger Woods’ stunning comeback at the 2019 Masters, however, you can bet Rolex counted their lucky stars they’d hung on to the superstar. Waterproof to 1,220 metres, the Sea Dweller is the result of decades of collaboration between expert watchmakers and diving professionals. Woods proves that you don’t have to be a water sports athlete to appreciate the stunning good looks and engineering of the Rolex Sea Dweller. 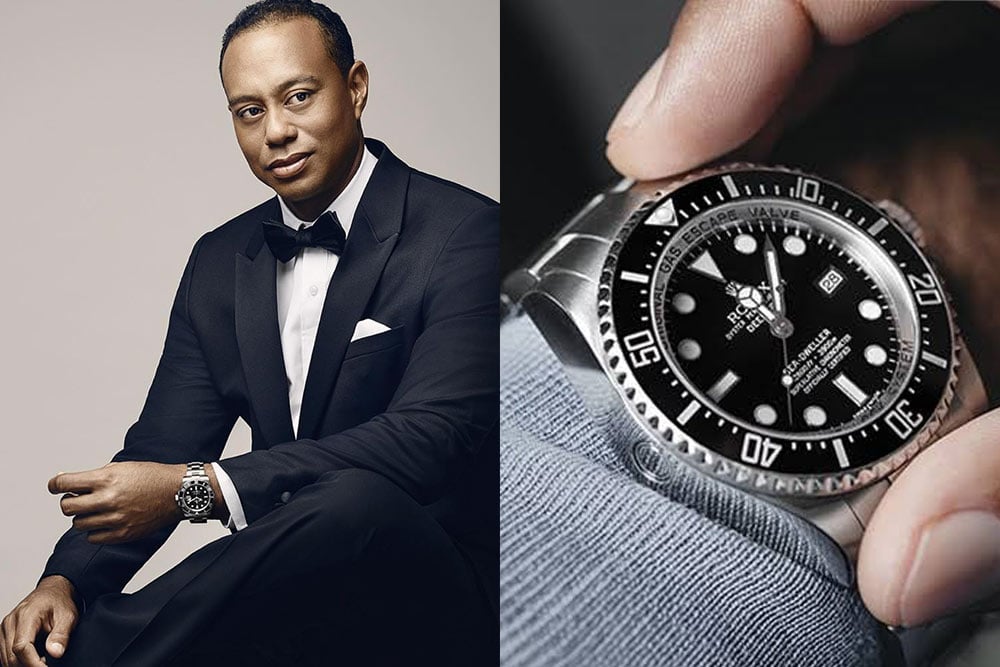 According to Forbes, Ronaldo is the second-highest-paid athlete in the world. Much of his income derives from endorsements, and he counts Tag Heuer as one of his many sponsors.

Introduced at Baselworld 2015, the TAG Heuer Formula 1 Cristiano Ronaldo CR7 Edition featured a black-and-gold colour scheme to evoke a football pitch. The chequer-patterned dial has three circular registers and large “CR7” text at the three o’clock position. Despite having a watch designed especially for him, Ronaldo often sports the Carrera Heuer-02T on his wrist when he’s not on the field.

When Michael Jordan received the Presidential Medal of Honor in 2016, Hodinkee reported that he wore the IWC Big Pilot Platinum Limited Edition for his appearance at the White House.

IWC only made 500 of these watches between 2003 and 2006, and today they’re tough to come by. Hearkening back to the pioneering days of aviation, Big Pilot luxury watches can withstand extreme temperatures, as pilots faced in unheated cockpits. The extra-large crowns helped gloved aviators to wind their watches while wearing padded flight suits. 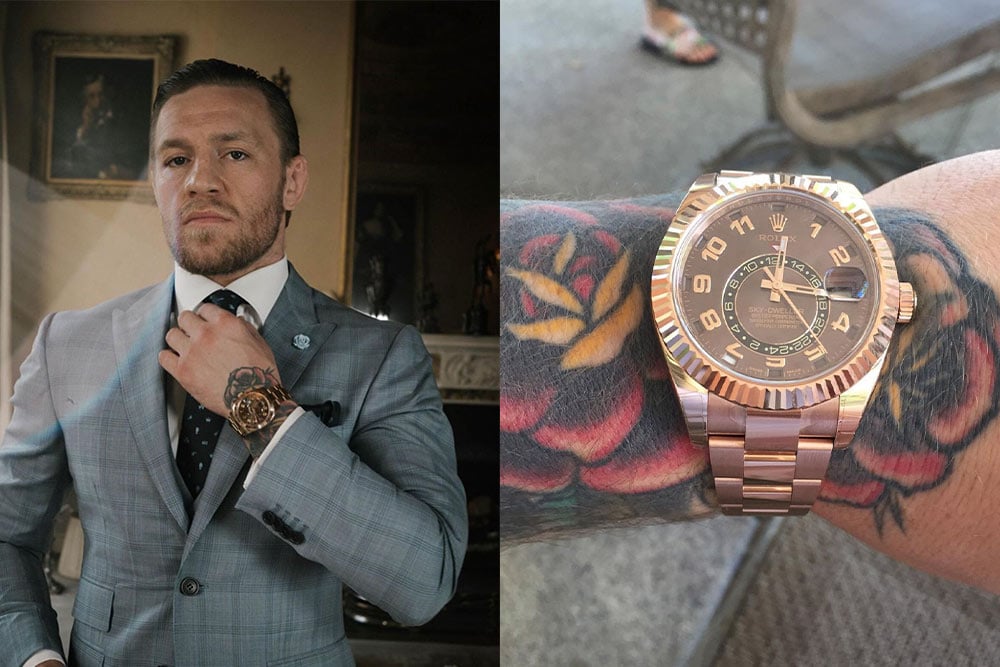 During his first game with the Cleveland Browns in September 2019, Odell Beckham wore a Richard Mille 11-03 McLaren Flyback Chronograph. Although the watch didn’t help Beckham’s team to win the game, it did garner significant attention on social media.

The partnership between Richard Mille and McLaren has resulted in a line of bold, unique timepieces. McLaren’s race cars are known for innovative design, daring materials, lightweight materials and powerful engines. You can wear all of these attributes on your wrist with a RM McLaren watch. The combination is absolutely perfect for an athlete like Odell Beckham Jr. 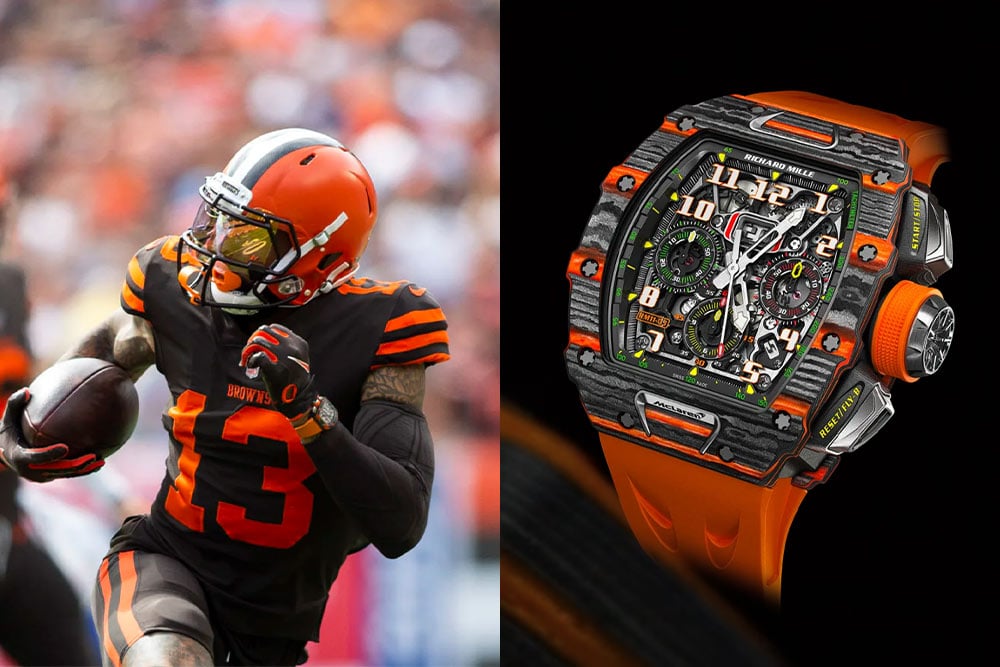 As one of the most recognisable basketball players in the world, Kobe Bryant has serious clout. And Hublot has capitalised on that clout with their King Power Black Mamba watch. Only 250 pieces were made, making them highly collectible.

Featuring the Los Angeles Lakers signature purple-and-gold colour scheme, the King Power Black Mamba has a micro-blasted black ceramic case and satin-finished 3N Gold plated hands with black SuperLuminova™. One of the most exciting features of this watch is the python snake strap sewed on black rubber. It almost appears to be alive.

During the men’s singles final of the 2018 French Open, Rafa’s hand began to cramp. As he received treatment, the cameras zoomed in on the beautiful orange watch strapped to his wrist. Eyebrows raised, and soon everyone was talking about the RM 27-03.

This tourbillon is an architectural wonder. At just 20 grams, it can withstand 10,000 Gs of force, perfect for a world-class tennis champion. And the unique skeletonised bridge gives the appearance of a front-facing bull. It’s a marvel. 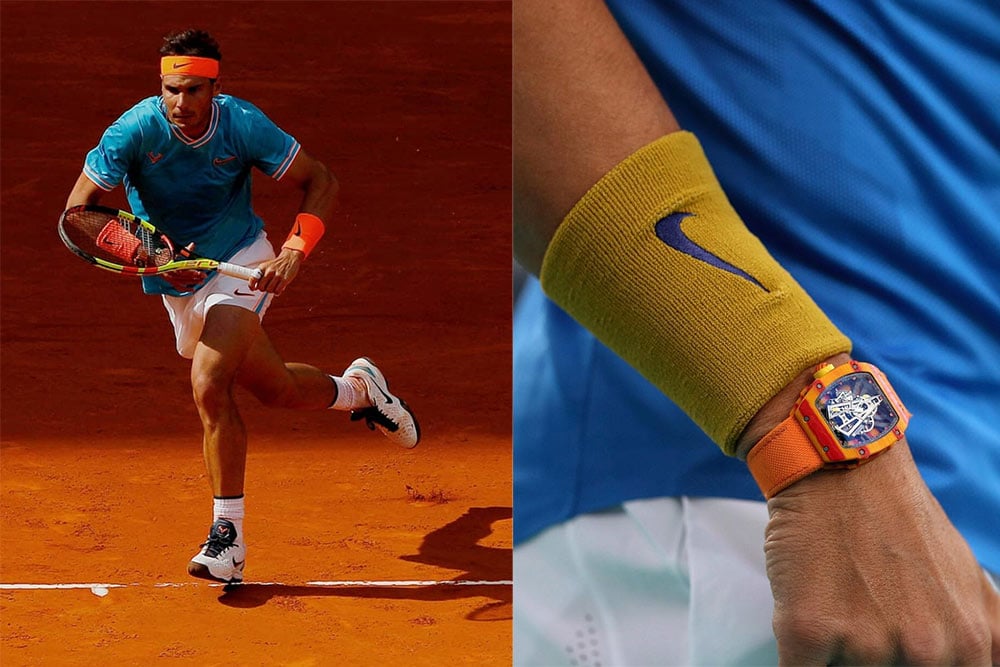 Gorgeous, sports-themed luxury watches aren’t just for professional athletes. Next time you add to your luxury watch collection, protect your acquisition with Q Report watch insurance. We’ll protect it from the unexpected and keep your investment secure.

10 Facts You Need To Know About Engageme...

Engagement Ring Insurance: The Do’s and ...