Are diamonds really a girl’s best friend? Some phrases become so commonly used that they shape our p...

END_OF_DOCUMENT_TOKEN_TO_BE_REPLACED

How Does Engagement Ring Insurance Work? The Complete Journey

You’ve found the perfect ring! It suits your personality and lifestyle, and...

Jewellery is made to be worn, and we wouldn’t have it any other way. But as...

You won’t find any goblins, ghouls, gremlins or ghosts in this horror story...

What Does Home and Contents Insurance Really Cover?

It’s easy to underestimate the cost of replacing your home and possessions....

Nobody likes to think about burglaries, but these statistics prove that no ...

You finally have the Rolex of your dreams. It’s chic, sophisticated and bea...

In many ways, luxury watches have rested firmly in the men’s domain (jewell...

We’ve heard some miraculous stories over the years about lost engagement ri...

It’s easy to find beautiful engagement rings. The challenge is to find ring...

You’re well-acquainted with the prices of products you buy regularly. You k...

How Much Should You Spend on Wedding Bands?

Have you thought about wedding bands yet? While the highest wedding jewelle...

From royal weddings to My Big Fat Greek Wedding, our culture is saturated with nuptial celebrations that are grand, frilly and over-the-top. But not every bride loves the large and luxurious.

If your significant other is a minimalist at heart, what kind of engagement ring should you choose? We’ve tracked the trends and found an array of gorgeous ring styles to soothe the minimalist soul.

It’s astonishing how much a classic solitaire can change when the diamond is set in the east-west position instead of north-south. Take an elongated diamond, such as a marquise or an emerald-cut. When it’s set perpendicular to the band, it has a traditional, precise appearance. Turn that same gemstone 90 degrees, and the engagement ring looks minimalist. The diamond and the band flow into one melodic line. 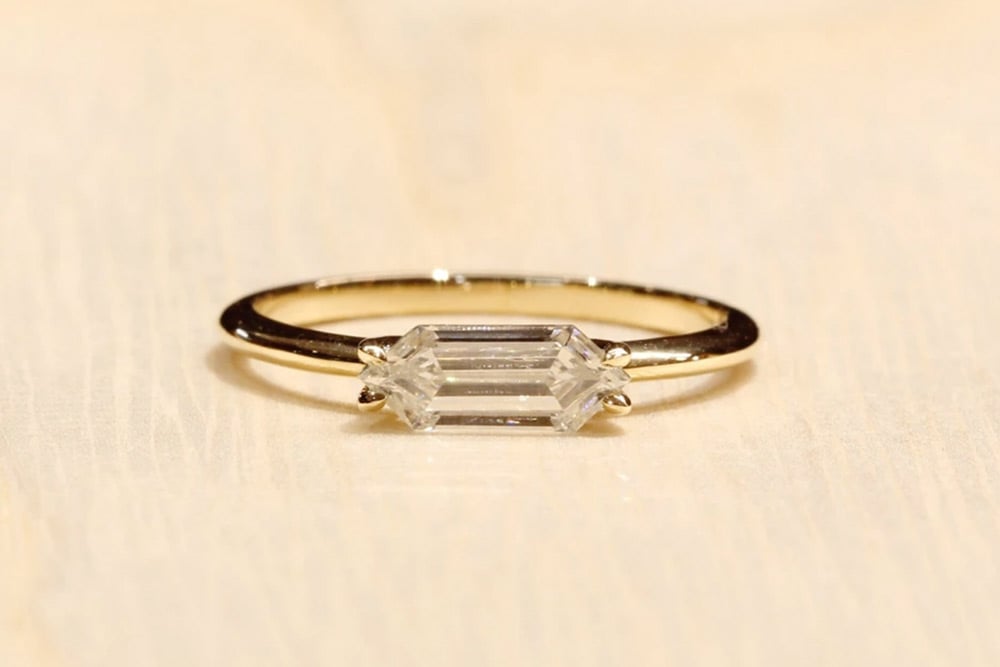 Here’s another take on East-West designs. We’re seeing minimalist engagement rings that combine the band and the stone in one seamless line. By using a baguette as the centre stone, jewellers are toning down traditional solitaires and creating understated, elegant engagement rings.

Love the classic solitaire but want to adopt a more minimalist style? Jewellers are creating solitaire engagement rings with extremely thin, hard-edged bands. There’s something refreshing and young about this style; we expect to see more of it. 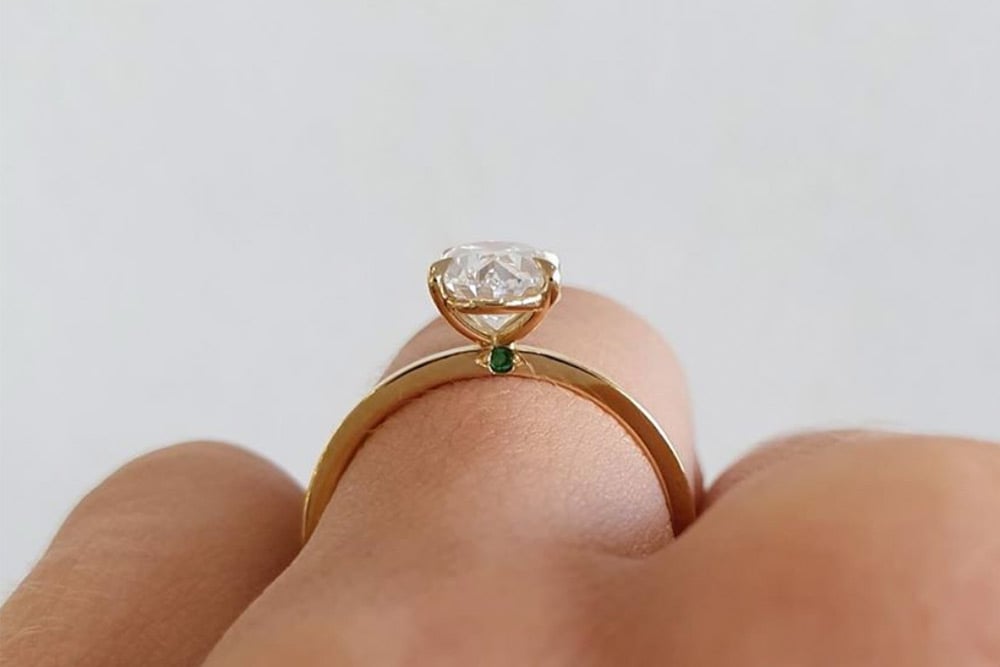 Scandinavian design has long produced minimalist interiors using simple geometric lines. By placing a round brilliant diamond inside a simple octagonal setting, we see a solitaire in a whole new light.

The double-band engagement ring has taken many forms in the past few years, and most of them are anything but minimalist. We’ve seen double pave bands with huge haloed stones in the centre and postmodern rhombus bands with gorgeous opals spanning the divide. Currently, however, minimalist designers are showing how simple and understated double-band designs can be when the lines and stones create unexpected flow.

Minimalist rings don’t have to eschew texture and sparkle. Combining a round brilliant diamond, two baguettes and several, small side stones creates a harmonious design. Its perfect symmetry and subtle garnishes bring an organic appeal to minimalist form.

Sometimes it’s the details that create a minimalist look. On its own, a sizeable pear-shaped centre diamond might appear flashy, but when two round diamonds flank it and soften the line to the band, it achieves a gorgeous simplicity. 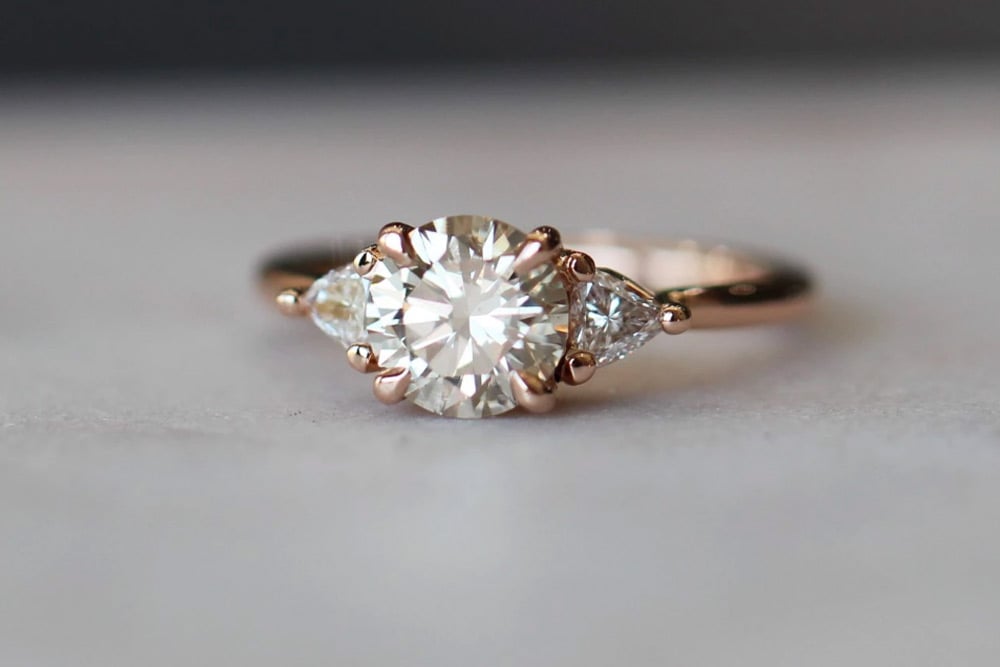 In the past, jewellers primarily used trillion-shaped diamonds as accents to other stones, but today they’re finally taking the limelight, especially in minimalist engagement rings. You’ll find three-sided gems with both round and pointed edges. One of the advantages of finding a trillion stone you like is that they appear more substantial, carat for carat, than most other diamond shapes. 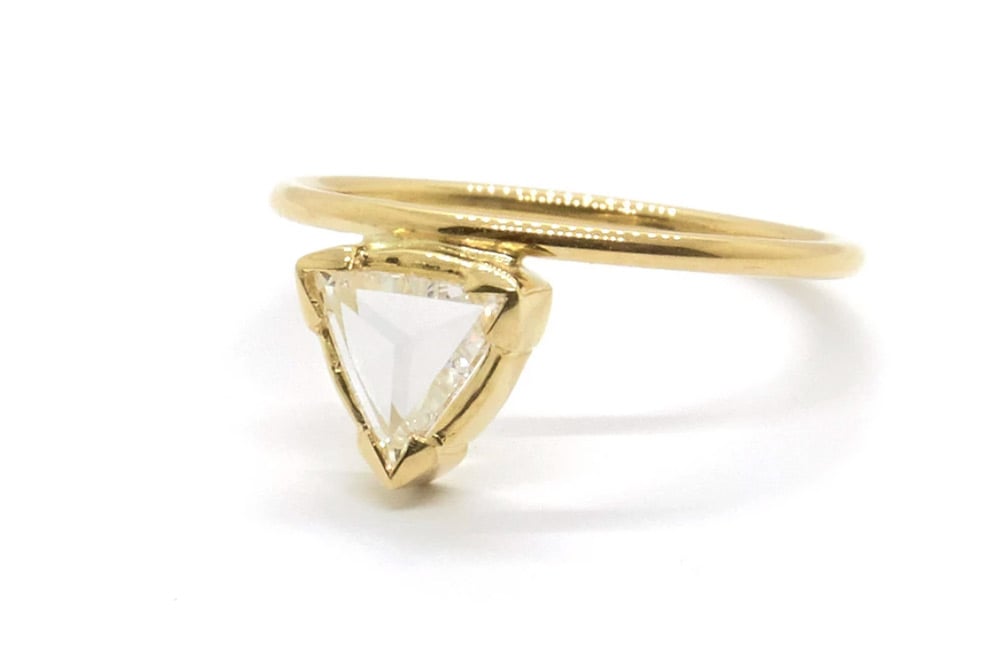 You’d be forgiven for thinking there’s a competition on Instagram to see which celebrity sports the most massive rock on her engagement ring. If that kind of sport isn’t for you, take a look at this trend: minimalist constellation rings. Instead of focusing on one giant sparkler, these rings create a delicate constellation of small diamonds or other gemstones.

This minimalist engagement ring trend tugs at our heartstrings with its beautiful symbolism. Instead of focusing all the attention on one stone, why not set two stones side by side, representing you and your partner? 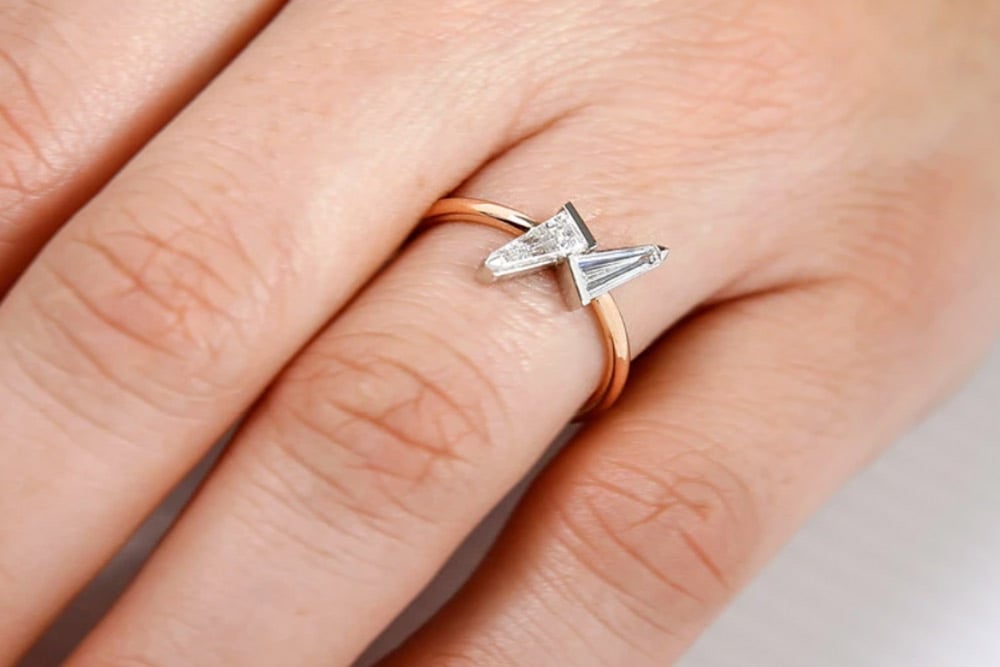 When you find the perfect engagement ring for your minimal bride, protect it with Q Report jewellery insurance. She can wear it with confidence and freedom, knowing it will be fully restored to her if the unexpected happens.