Trying to call us? We are currently updating our system. Contact us using the Live Chat feature or email us at info@qreport.com.au and we'll call you back.

When you first start shopping for an engagement ring, you might feel that you’ve gone back to school...

END_OF_DOCUMENT_TOKEN_TO_BE_REPLACED

How to Insure an Engagement Ring Without Home & Contents Insurance

Is it possible to insure an engagement ring without home and contents insur...

What Kind of Documents Do I Need to Get My Ring Insured?

You’ve found the ring of her dreams, and now you need to protect it. Specia...

Celebrities are known for their extravagant lifestyles—whether it’s homes, holidays, cars or parties—they usually go above and beyond the norm. And of course, expensive jewellery is no exception.

Here are some of the most expensive celebrity engagement rings:

It’s no secret that Mariah Carey is a bit of a diva, so of course billionaire James Packer had to wow her with a 35-carat diamond and platinum ring. The estimated value is a whopping AUD$12 million (pocket change for a billionaire). 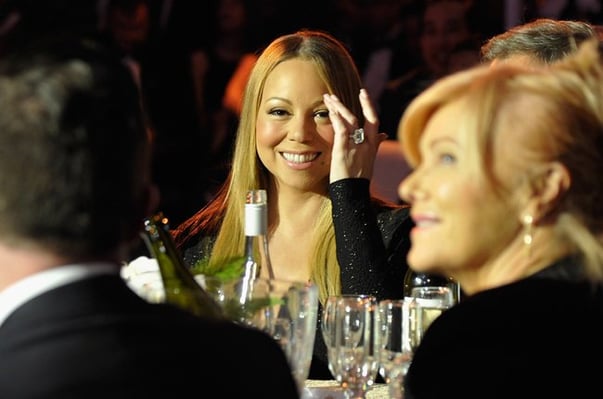 The couple got engaged in January after less than a year of dating, and sadly didn’t make it down the aisle. The ring however, will go down in history as one of the most expensive engagement rings in the world.

When you write a book titled ‘My Love Affair With Jewellery’, one can only expect you to have a fine selection of jewels. Elizabeth Taylor’s most famous piece of jewellery is the Elizabeth Taylor Diamond, a D-color potentially flawless 33.19-carat Asscher cut diamond originally known as the Krupp Diamond. The diamond was given to her by Richard Burton in 1968 and was auctioned for AUD$10 million in 2011. However, it’s expected to be worth much more today.

Kanye West proposed to Kim Kardashian with a 15-carat, cushion-cut, D-flawless diamond designed by Lorraine Schwartz. D-Flawless and type 2A diamonds are said to be the purest and most valuable type in the world, and the ring is rumored to be worth AUD$9.9 million.

In 2016, Kanye West upgraded Kim’s engagement ring with a 20-carat Lorraine Schwartz ring, but it was stolen from her at gunpoint in a Paris heist.

Jay Z liked it, so he put an 18-carat, emerald-cut diamond ring on it. The ring was designed by famous celebrity jeweler Lorraine Schwartz, and is said to be worth AUD$6.2 million. Set on a platinum base with an elegant, simple design, this is certainly a ring fit for Queen Bey.

The engagement only lasted four months, but Paris’ fiance Paris Latsis gave the hotel heiress an astonishingly large 24-carat, AUD$5.8 million engagement ring. After they broke up, she auctioned off the ring and donated the funds to the victims of Hurricane Katrina.

Her love might not cost a thing, but the 6.1-carat Harry Winston pink diamond engagement ring cost her then-fiance Ben Affleck around AUD$1.4-$3.1 million. However, the 8.5 carat blue diamond ring given to her by Marc Anthony steals the show, which is rumoured to be worth $5 million.

When your fiance is literally a prince, you can expect a gorgeous, timeless ring fit for royalty. Prince Rainier proposed to Grace Kelly with a Cartier ring made up of a 10.47-carat, emerald-cut diamond flanked by two baguettes. It’s rumoured to be worth AUD$5.7 million.

American basketball player Kobe Bryant gave Vanessa Bryant an 8-carat purple diamond ring valued at AUD$4.9 million. This isn’t the ring he initially proposed with, but he gave it to her as an ‘apology’ ring after a cheating scandal.

The Lesotho III diamond engagement ring was given to Jacqueline Kennedy by billionaire Aristotle Onassis in 1968. The near-flawless 40.42-carat marquise-cut diamond got its name from the famous 601-carat Lesotho rough diamond, and was the third-largest gem cut from it. in 1996, the ring was auctioned for AUD$3.2 million.

Hollywood actor Ryan Reynolds proposed to Blake Lively with a 12-carat oval cut flanked by tiny stones for some added sparkle. Blake is one of the first Hollywood stars to wear a rose-gold band and may have even started a trend. The ring is reportedly valued at around AUD$2.4 million. 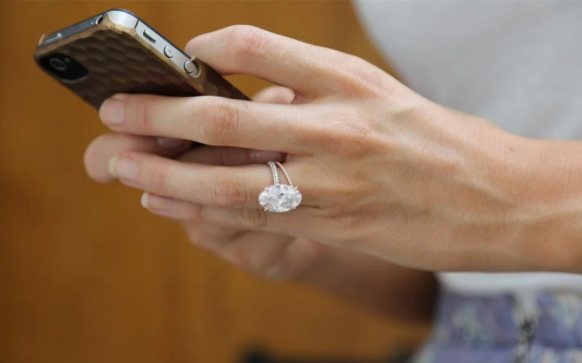 Whether your engagement ring cost you millions, or a fraction of that, it will always be something that is valuable to you. Kim Kardashian’s Paris heist proves that not even heavily protected celebrities are exempt from theft or loss of their jewellery. Make sure you get diamond ring insurance by people who know jewellery – like Q Report.

10 Facts You Need To Know About Engageme...

Engagement Ring Insurance: The Do’s and ...